Welcome to THE MAKING OF A NATION -- American history in VOA Special English. The United States Constitution guarantees freedoms such as freedom of speech, freedom of the press and freedom of religion. The Bill of Rights in the Constitution protects these and other individual rights. But the government has not always honored all of the rights in the Constitution. In the seventeen hundreds, for example, President John Adams supported laws to stop Thomas Jefferson and the Democratic Party from criticizing the government. During the Civil War, President Abraham Lincoln took strong actions to prevent newspapers from printing military news. And, during the nineteen fifties, Senator Joseph McCarthy accused innocent people of being communists and traitors. Some of the most serious government attacks on personal rights took place in nineteen nineteen and nineteen twenty. A number of government officials took sometimes unlawful actions against labor leaders, foreigners and others. This week in our series, Kay Gallant and Harry Monroe discuss the campaign that came to be known as the "Red Scare."
These actions took place because of American fears about the threat of communism. Those fears were tied closely to the growth of the organized labor movement during World War One. There were a number of strikes during the war. More and more often, workers were willing to risk their jobs and join together to try to improve working conditions. President Woodrow Wilson had long supported organized labor. And he tried to get workers and business owners to negotiate peacefully. But official support for organized labor ended when strikes closed factories that were important to the national war effort. President Wilson and his advisers felt workers should put the national interest before their private interest. They told workers to wait until after the war to demand more pay and better working conditions. In general, American workers did wait. But when the war finally ended in nineteen eighteen, American workers began to strike in large numbers for higher pay. As many as two million workers went on strike in nineteen nineteen. There were strikes by house builders, meat cutters, and train operators. And there were strikes in the shipyards, the shoe factories and the telephone companies. Most striking workers wanted the traditional goals of labor unions: more pay and shorter working hours.
But a growing number of them also began to demand major changes in the economic system itself. They called for government control of certain private industries. Railroad workers, for example, wanted the national government to take permanent control of running the trains. Coal miners, too, demanded government control of their industry. And even in the conservative grain-farming states, two hundred thousand farmers joined a group that called for major economic changes. All these protests came as a shock to traditional Americans who considered their country to be the home of free business. They saw little need for labor unions. And they feared that the growing wave of strikes meant the United States faced the same revolution that had just taken place in Russia. After all, Lenin himself had warned that the Bolshevik Revolution would spread to workers in other countries. Several events in nineteen nineteen only increased this fear of violent revolution. A bomb exploded in the home of a senator from the southeastern state of Georgia. And someone even exploded a bomb in front of the home of Attorney General A. Mitchell Palmer, the nation's chief law officer. 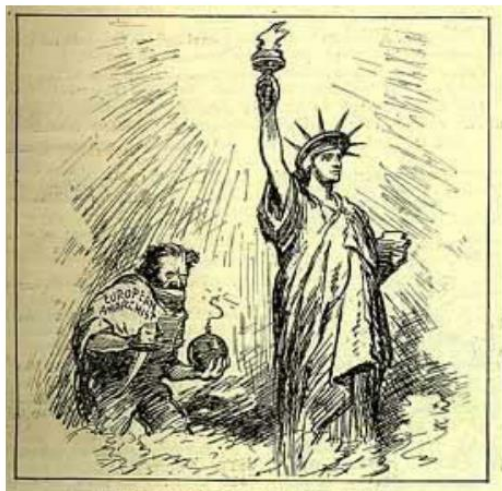 However, the most frightening event was a strike by police in Boston, Massachusetts. The policemen demanded higher wages. But the police chief refused to negotiate with them. As a result, the policemen went on strike. When they did, thieves began to break into unprotected homes and shops. Massachusetts Governor Calvin Coolidge finally had to call out state troops to protect the people. His action defeated the strike. Most of the policemen lost their jobs. All this was too much for many Americans. They began to accuse labor unions and others of planning a revolution. And they launched a forceful campaign to protect the country from these suspected extremists. Leaders of this campaign accused thousands of people of being communists, or "reds." The campaign became known as the Red Scare. Of course, most people were honestly afraid of revolution. They did not trust the many foreigners who were active in unions. And they were tired of change and social unrest after the bloody world war. A number of these Americans in different cities began to take violent actions against people and groups that they suspected of being communist extremists. In New York, a crowd of men in military uniforms attacked the office of a socialist newspaper. They beat the people working there and destroyed the equipment.
In the western city of Centralia, Washington, four people were killed in a violent fight between union members and their opponents. Public feeling was against the labor unions and political leftists. Many people considered anyone with leftist views to be a revolutionary trying to overthrow democracy. Many state and local governments passed laws making it a crime to belong to organizations that supported revolution. Twenty-eight states passed laws making it a crime to wave red flags. People also demanded action from the national government. President Wilson was sick and unable to see the situation clearly. He cared about little except his dream of the United States joining the new League of Nations. But Attorney General Palmer heard the calls for action. Palmer hoped to be elected president the next year. He decided to take strong actions to gain the attention of voters. One of Palmer's first actions as Attorney General was to prevent coal miners from going on strike. Next, he ordered a series of raids to arrest leftist leaders. A number of these arrested people were innocent of any crime. But officials kept many of them in jail, without charges, for weeks. Palmer expelled from the country a number of foreigners suspected of revolutionary activity.
He told reporters that communists were criminals who planned to overthrow everything that was good in life. Feelings of fear and suspicion extended to other parts of American life. Many persons and groups were accused of supporting communism. Such famous Americans as actor Charlie Chaplin, educator John Dewey, and law professor Felix Frankfurter were among those accused. The Red Scare caused many innocent people to be afraid to express their ideas. They feared they might be accused of being a communist. But as quickly as the Red Scare swept across the country so, too, did it end in nineteen twenty. In just a few months, people began to lose trust in Attorney General Palmer. They became tired of his extreme actions. Republican leader Charles Evans Hughes and other leading Americans called for the Justice Department to obey the law in arresting and charging people. By the summer of nineteen twenty, the Red Scare was over. Even a large bomb explosion in New York in September did not change the opinion of most Americans that the nation should return to free speech and the rule of law. The Red Scare did not last long. But it was an important event. It showed that many Americans after World War One were tired of social changes. They wanted peace and business growth. Of course, the traditional way for Americans to show their feelings is through elections. And this growing conservatism of the nation showed itself clearly in the presidential election of nineteen twenty. That election willbe the subject of our next program.