Millions of young people from Kiribati to Germany marched Friday to demand that world leaders take action to fight climate change.
In Australia, protesters marched in 110 towns and cities, including Sydney and the capital Canberra. Organizers expected more than 300,000 people to march -- the country's largest demonstration since protests against the Iraq War in 2003. A 15-year-old student told the Associated Press, "Even though we ourselves aren't sick, the planet which we live on is, and we are protesting and fighting for it."
In the Pacific island nation of Kiribati, students shouted, We are not sinking, we are fighting. Rising sea levels have already washed away some villages there. 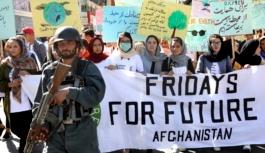 In Afghanistan, armed soldiers protected about 100 people marching through the streets of Kabul. A group of young women led the protesters. One organizer said, The problem in Afghanistan is our leaders are fighting for power but the real power is in nature.
In the German capital of Berlin, about 80,000 protesters gathered at the Brandenburg Gate. In the nearby offices of Chancellor Angela Merkel, German lawmakers worked on a plan to limit the country's greenhouse gas emissions.
Hundreds of protests took place across Europe. In Finland's capital Helsinki, a man dressed as Santa Claus stood outside parliament holding a sign that read "My house is on fire, my reindeer can't swim."
In Tokyo, Japan, students and activists carried signs reading "Go Green" and "Save the Earth." Similar protests took place in South Korea, the Philippines, Pakistan and India.
Events also were held in South Africa, Nigeria, Uganda and Kenya. In Nairobi, some protesters wore hats made from plastic bottles to bring attention to plastic waste, a major threat to the world's oceans.
Scientists say global warming caused by heat-trapping greenhouse gases has already led to more severe dry weather and heatwaves, melting ice, rising sea levels and flooding. The last four years were the four hottest ever recorded.
I'm Ashley Thompson.